Campaigns
Want to be part of a group build? This is where to start, plan, and meet about them.
Hosted by Todd Michalak
Below 1000 Tons Campaign

As the title states, this is the official thread for the Below 1000 Tons Campaign

Operational Overview
The idea is a campaign build for vessels less than 1000 tons weight, armed or unarmed, over or below the water. any scale, any period allowed. There is quite a lot choice for models here (small craft, tugs, corvettes, torpedoboats, barges, e-boats, gunboats, even many submarines would be possible to build here.

The Rules and Regs
As above mentioned, every scale and every time period is allowed, ships and submarines - just one Limitation: the real ship need(ed) to have less than 1000 tons in weight.

Contest Element
At least three pictures or your build, the more the better. Two pictures of the finished Project in the Campaign Gallery and you will get a Ribbon. You can enter more than one vessels during the Campaign but you can just earn one Ribbon.

First one to enlist, that hasn't happened for some time. I will post a pic of a partially built IJN midget submarine to see if it will be allowed.
Take care,
Don "Lakota"

. Just have to decide now which kit to choose, so much choice here...

Just have to decide now which kit to choose, so much choice here...

Agreed, I have 4 different kits which will work. I may just say screw it and do all 4

Just have to decide now which kit to choose, so much choice here...

Agreed, I have 4 different kits which will work. I may just say screw it and do all 4

Also need to have a rummage, might find something interesting.

REPLY & QUOTE
McRunty (Rory Snell) says
Right now I have the following. All in 1/350:

REPLY & QUOTE
Cosimodo (Michael Mitchell) says
I haven't had the urge to build a ship for a while. Something small may help to get me back into it. I have a couple of 1/350 small craft, a gunboat and a minesweeper. I am guessing they are both sub-1000 tonnes, so I have enlisted for this one.

Here is my entry into this fine group build. Shell Welder from ARK Models which is a rebox of a rebox going back to 1961. Some flash but not bad. Shell Welder built out at 586 tons. 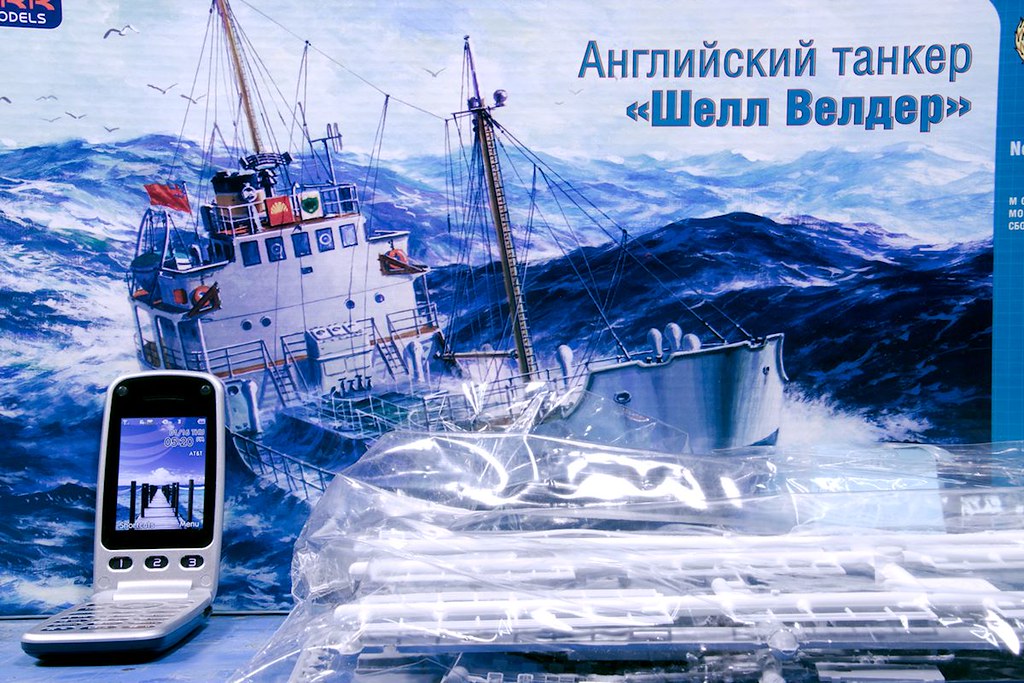 Two piece hull if you want to do it waterline, a sheet of photo etch and a bag of resin pieces. 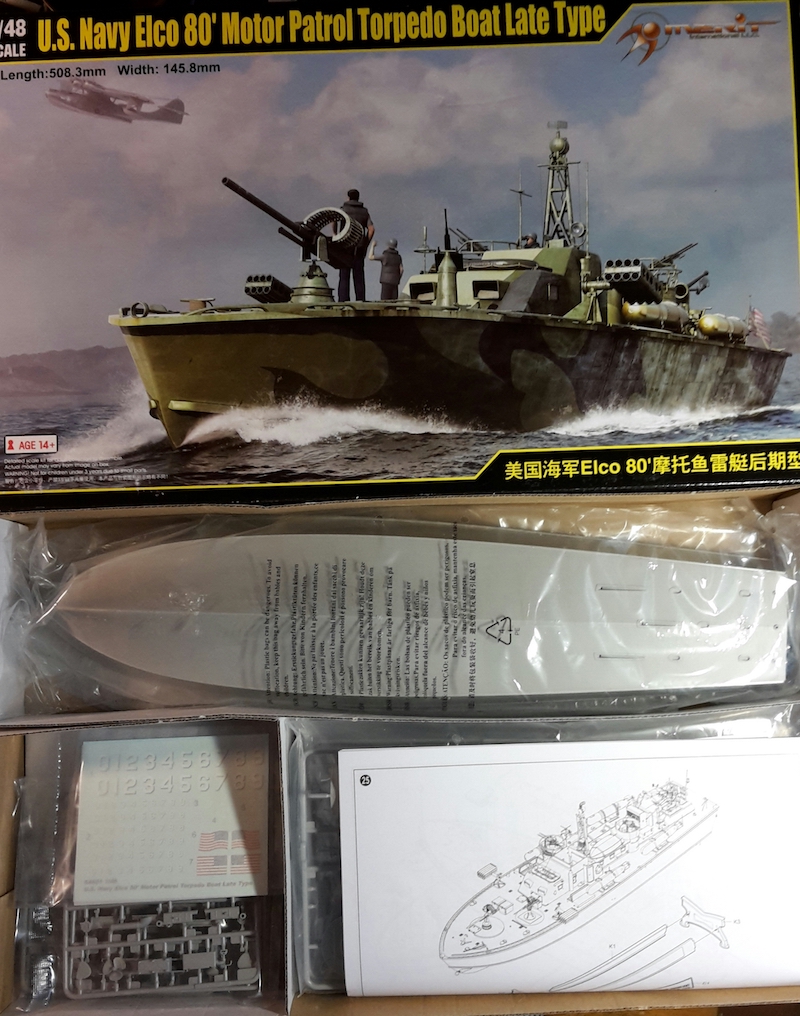 REPLY & QUOTE
Black_sheep (Thomas Wirsching) says
Whow a lot of different and quite interesting ships we are getting built here. Will enjoy to watch all these!

@Mark: Never seen this kit before and googled it; do you know that there are one etched upgrade set and a decal set for it available?

Whow a lot of different and quite interesting ships we are getting built here. Will enjoy to watch all these!

@Mark: Never seen this kit before and googled it; do you know that there are one etched upgrade set and a decal set for it available?

No I didn't know the PE or decals, well have to check into it.

Update. Sent an email to Pete at Atlantic models about purchasing those items.

REPLY & QUOTE
Black_sheep (Thomas Wirsching) says
Well gentlemen, I have decided and would like to introduce my entry:

The Mousquet torpedo destroyer in 1:350 scale:

I accidently found Inside the Armour´s lovely multimedia kit of this ship with his remarkable story. Although it is just ridiculously 17 cm Long there is quite some work with all the resin and etched parts for her - some joyful hours building time are guaranteed: 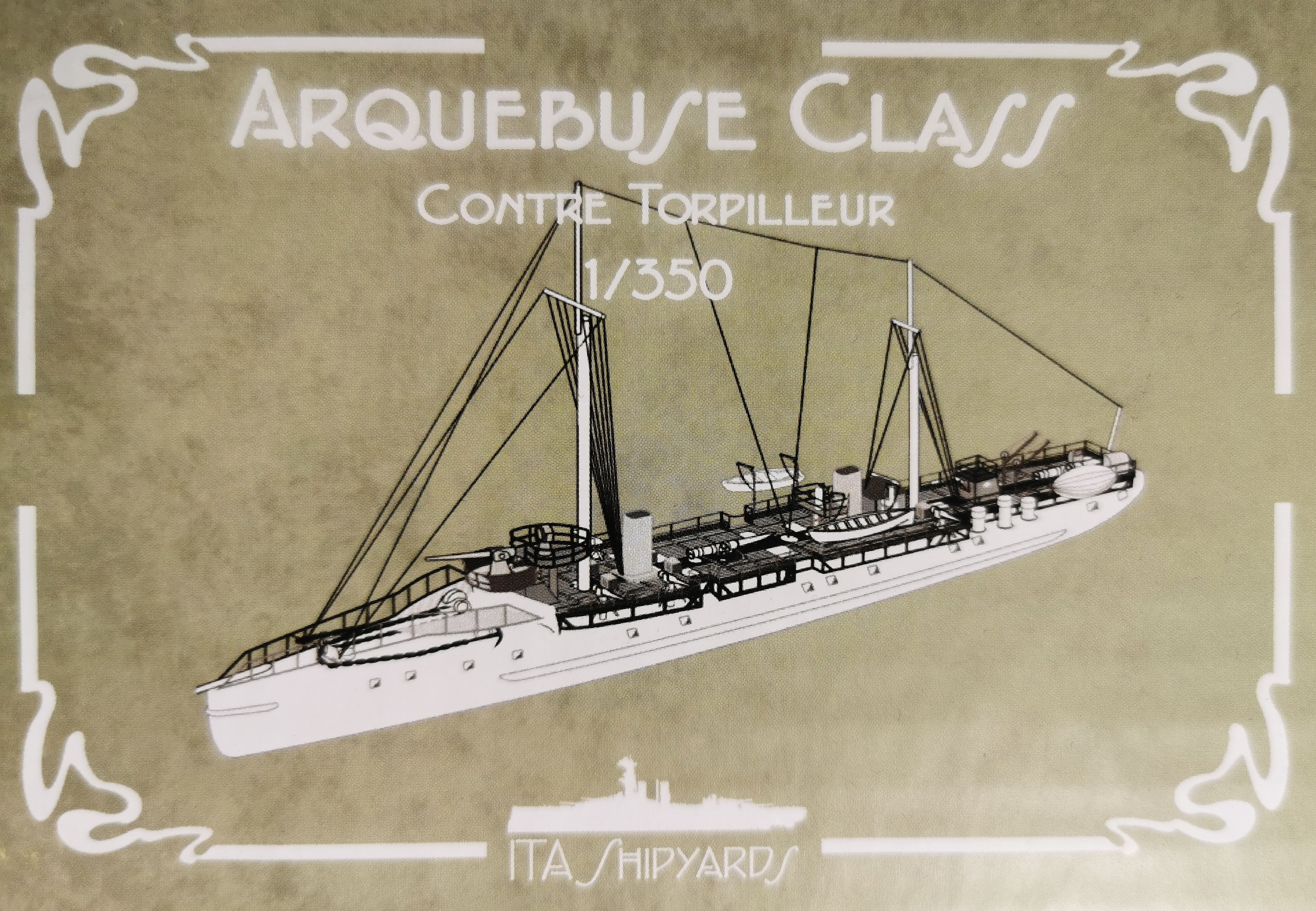 This is my starting line: 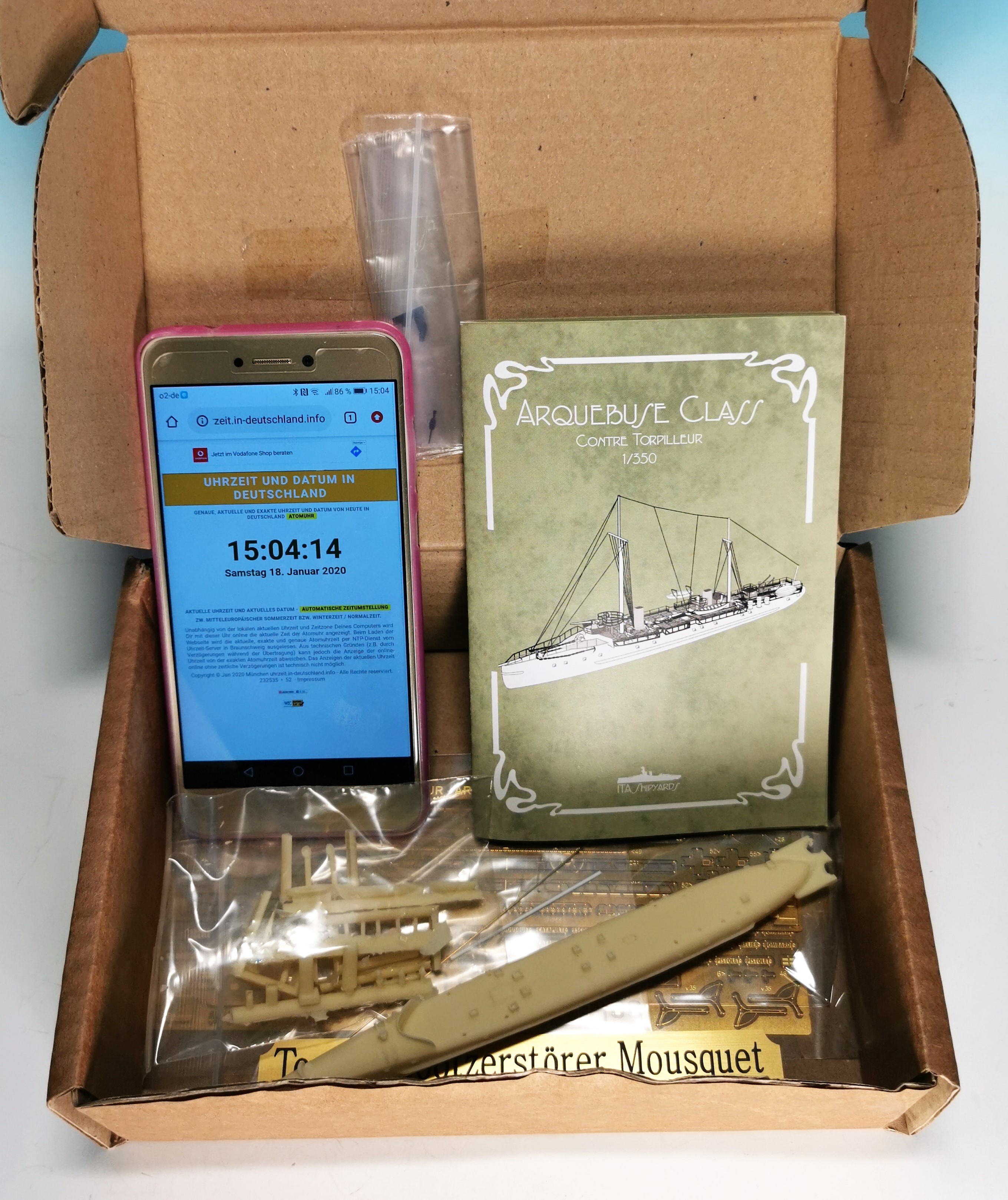 And, as usually in my builds, at the beginning I would like to tell you the interesting story of the Mousquet´s combat history: 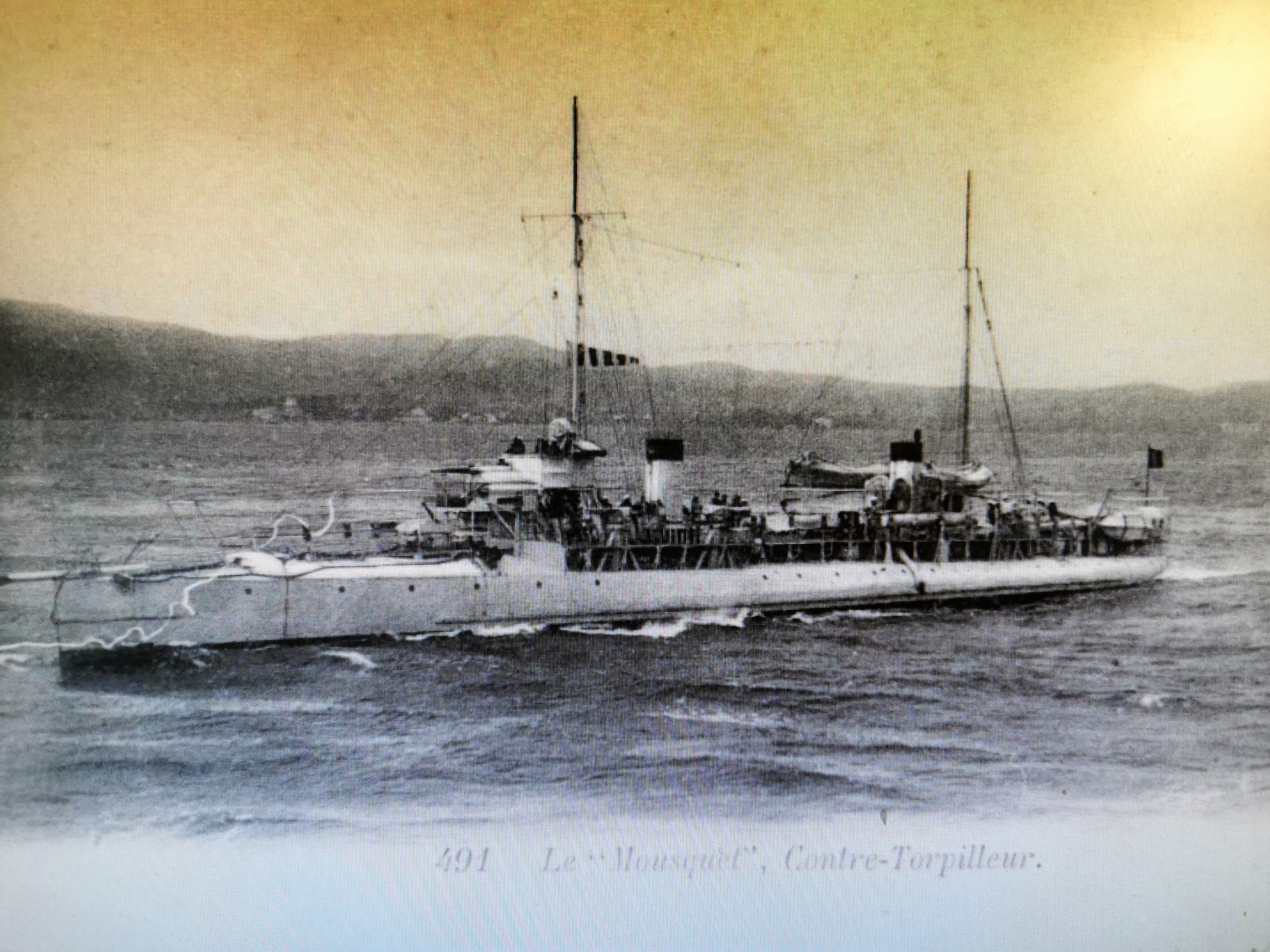 The Mousquet was the second ship of the Arquebuse destroyer class with a displacement of 323 tons. It was armed with 1 × 65 mm gun, 6 × 47-mm guns and two single 38,1 cm torpedo launchers. Crew was 77 officers and enlisted and maximum speed was 28 knots.

At the outbreak of the first world war the ship was stationed at the important harbor of Penang / Malaysia which was at this time an important base of the triple entente and home of several warships.

At the 28 oktober 1914 the Imperial german light cruiser Emden entered penang harbor and immediately opened fire at the anchored Russian criser Schemtchuk and quickly sank him. As the Emden was about to leave the harbor area she met the Mousquet who just retourned back from a patrol. Already with its third salvo at a range of 4.300 meters the Emden achieved one hit with a 10,5 cm projectile which caused flooding in Mousquet´s boiler room. Mousquet tried to return fire and even fired one torpedo but quickly veered away. Emden also ceased fire after this.

Because of its damage engine room Mousquet couldn´t hold its high speed and was finally catched up again by Emden. As the Germans feared Mousquets torpedoes and there were no signs of a capitulation visible Emden opened fire again. Mousquet was hit by about further ten 10,5 cm projectiles began to sink heavily devastated. 40 poor souls went down with her but 36 crewmembers were picked up by the Emden. One single crewmen made it safely back by swimming to the shore.

As there were too many seriously wounded and burned French sailors Emden was not able to competently tread them aboard. Two days later she stopped the English freighter Newburn and ordered their crew to take over all French captives and sail them immediately back to Sabang at the Netherland´s operated hospital. This action saved some more french lives which brought the Emden later high credit by her enemies and contributed further to her reputation.

I would like to build the following model for this campaign. An IJN Midget Submarine used during the Battle of Pearl Harbor. I originally started building this for Pearl Harbor campaign but never finished.

I was moving right along on this model until it rolled off the kitchen table. Still need to add some parts, do a repair, putty and sand, and prime and paint.

I lost my modeling mojo when a part broke. I didn't want to do a repair at that time so I put the kit away until now. At 46 tons I am well under the 1000 ton limit.

Please let me know if this kit will be acceptable for the campaign, I know the construction is more than 25% complete but the total work still needed makes it not even close to completetion.
Take care,
Don "Lakota"

I am fine with your entry..Welcome!

The hull is about 5" long. Its hard to show correct colours. The hull colours I've chosen are not those suggested by Heller - mine are based on a museum model of a chebec, or xebec - a tartane's bigger brother.

REPLY & QUOTE
YellowHammer (John McDaniel) says
Hi Guys,
I'm trying to get my modeling mojo back so I thought this would be a great campaign to get the juices flowing again. I usually build OOB, sometimes adding a little PE. We're already seeing great work on a variety of subjects. I've got several options in the stash, both surface ships and subs so I'm not sure yet which I'll build.
Looking forward to this.
John

REPLY & QUOTE
Bink123 (Richard Bethell) says
Yellowhammer - the campaign is over Aug. 31, 2020 - so if I were you I'd pick something easier to complete in the time so as not to feel rushed.

What do you have in your stash that you're considering?