These first pictures are of outside the museum, and inside the museum. In the picture showing the superstructure, the crane is not mounted on the ship, they were doing some dockside work.

Once inside, I took a couple of photos of the display model of the North Carolina, and a couple of the colonial-era North Carolina. Unfortunately, because of the reflections & glare, they didn't turn out so good.


Going up the gangplank, I stopped and took a picture of the boat boom. This particular boat boom is on the after end of the ship, around the fantail.

Once aboard, you come upon this half-wall, with several 20mm guns.

I thought the aircraft crane was interesting. You'll notice that, right above where the wing of the Kingfisher aircraft passes in front of the plane, there's a hydraulic cylinder on the crane structure. However, I didn't see a piston that would normally be associated to a hydraulic cylinder.

This is a twin 40 mm gun tub. [DSC00102] Around this gun was some bolted-together structure (part of fire direction control?), and those nuts & bolts were big! I took this picture, using a quarter as a reference, to give an idea of how big the bolts are. 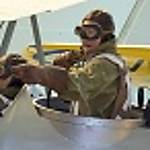 CaptnTommy
If you want to get an idea of Battleship action during WWII read about the BB battles around Guadalcanal during 1942 and 1943. the North Carolina was deep into you.
OCT 19, 2017 - 07:47 PM

timmyp
Tim, I think most of the exterior shots were posted. I spent most of my time below decks; it was a hot day, and I was pretty wrung out when I finally got topside. Didn't have much energy at that point to go up into the superstructure and look around.
JAN 16, 2018 - 12:36 PM 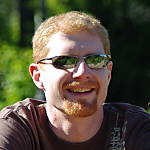 RussellE
Fascinating pictures Timmy of a most interesting ship! Thank you for sharing! ... if only the RN had been allowed to keep a KGV as a museum piece
MAR 04, 2018 - 08:13 AM

timmyp
Glad you liked the photos, Russell. Always willing to share that kind of stuff! Hopefully, my next walkaround will be for the USS Constitution.
MAR 04, 2018 - 11:23 PM
Go to Forum Topic
Copyright ©2021 by Timothy E Parker. _OPINIONS Model Shipwrights, KitMaker Network, or Silver Star Enterrpises. Images also by copyright holder unless otherwise noted. Opinions expressed are those of the author(s) and not necessarily those of Model Shipwrights. All rights reserved. Originally published on: 2017-08-20 17:55:22. Unique Reads: 13135