a photo feature by Hans-Hermann Bühling
2
Comments
The Wurfrahmen 40 ("launch frame 40") was a German World War II multiple rocket launcher nicknamed Stuka zu Fuss ("Stuka on Foot" or "Walking Stuka").Introduced in late 1940, the weapon system was a framework with adjustable base plates fitted over and alongside a vehicle which could hold 300 mm high explosive (HE) rockets; 280 mm HE and 320 mm incendiary rockets were also used, the rockets being fired while in their loading crates. Although spin stabilized, the rockets were not as accurate as conventional artillery and reloading was time consuming due to the rocket's weight. Rockets were ripple-fired in large numbers where feasible to quickly saturate a target. The Wurfrahmen 40 was successful in service as a support weapon for the mobile Panzer formations, particularly in urban areas.

Kaktusas
Nice rocket, unfortunately frame cannot be used as reference. Despite sign telling it was built according original documents, difference from period photos is wast. First, rocket should be located in frames, not wobble freely. The whole idea of frame is to be used as both, transport cradle, and launcher, giving some sort of direction to the rocket to be launched. So originally, mount was much more complicated than this. 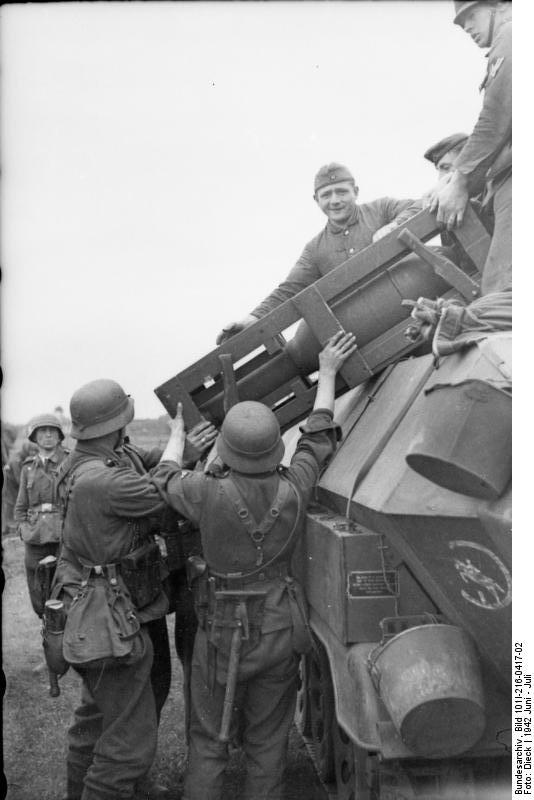 Taeuss
Funny, I was thinking the same thing when I saw the picture: "Wow, I don't want to be anywhere near this thing when it launches -its not supported!" or words to that effect. Clearly the museum got it wrong and was too embarrassed/arrogantly stupid to admit as much. My teenaged daughter could have built a more convincing replica!
JUL 20, 2018 - 03:04 AM
Go to Forum Topic
Copyright ©2020 by Hans-Hermann Bühling. _OPINIONS Model Shipwrights, KitMaker Network, or Silver Star Enterrpises. Images also by copyright holder unless otherwise noted. Opinions expressed are those of the author(s) and not necessarily those of Model Shipwrights. All rights reserved. Originally published on: 2018-07-19 03:22:18. Unique Reads: 12108